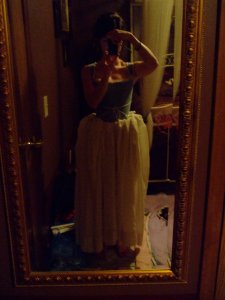 Yet another addition to the 18th century pool… This is an under-petticoat worn over the bumroll. Here ya go!

Ingredients:
2, 72”wide White Curtains purchased at a thrift store
Thread
something for ties

I chose to use curtains because they are already hemmed and I happened to come across a pair of lightweight, cream ones. This petticoat has 2 ties, to be tied on each side of the hips.

First I measured from my waist to how long I wanted my petticoat to be, about 37” for me. I then measured from the bottom (already hemmed) part up to the disired length. You cut the whole bottom off of it from there. You need to do this twice to get a nice full petticoat. The width of the curtains were 72” so my petticoat’s circumference is 144”.

From there I took the sides and pinned them overlapping eachother, zigzag stitching from the bottom all but 6” at the top (on both sides), to keep the petticoat smooth.

For both the front and back, the fabric needs to be gathered to the centermost part of each tie, leaving enough on each end to tie to the other portion. Sew that down and finish with whatever method you see fit. I just surged the tie to the fabric and was done with it. 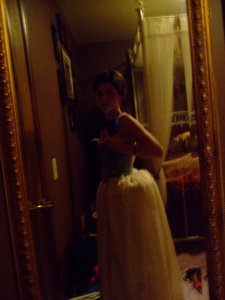 Again, this is another AMAZINGLY THRIFTY thing to do that took no time at all! 🙂 It makes me so happy

So, right now I have this crazy itch for 18th century stuff… so I’m busting out things left and right and having fun doing it. 🙂

note: A bumroll is another undergarment used in the 18th century. It was used to give the illusion that a woman had larger hips and rear, a sign of fertility (so they say).

Here’s my bumroll and how I made it:

I got my idea from this site on how to measure it. It says to take a measurement of your hips, and take away 4 inches. This measurement (28 inches in my case) is what the inner oval shall be. From there I modified because the lady who makes this is 5’11” compared to my 5’2”, and I would have looked ridiculous on me. At the very back of mine, I measured 5” from the center oval. On the sides, 3’1/2”. Then you just connect the dots to make the crescent shape

then you cut it out: 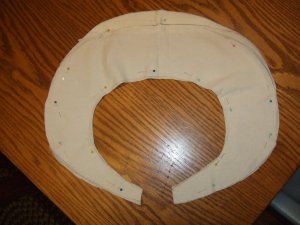 then sew it together according to the directions on the site and stuff with your plastic grocery bags:

sew up the opening and add ties: 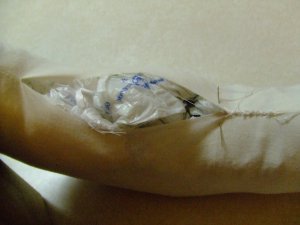 This was totally easy and thrifty and I like it 🙂 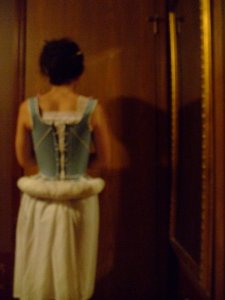 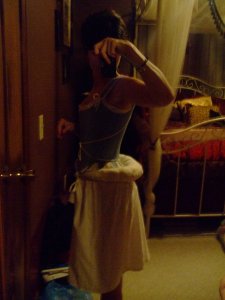 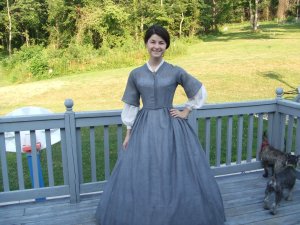 This is my finished “Nun Dress”, as my brother calls it. I don’t think it cost me more than $12, which is quite an accomplishment I think. 🙂 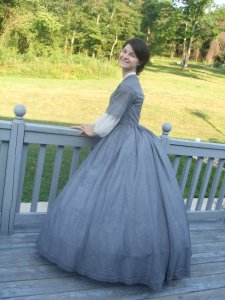 I made the collar and undersleeves from a cheesecloth of all things! I got them both done in about 2 hours. I’m excited to start making new bodices for this dress, I think that it will be a very nice and practical dress for whatever I may need it for 😀

Here it is without the under sleeves:

And here’s me with my mommy!

I have always wanted an 18th century Stays(as they were not called corsets until the 1800’s) and on Friday, I just decided I was going to make’em.

I started with this handy dandy site called the Custom Corset Pattern Generator. This site is for Elizabethan corsets, but I had a plan: The basic shape of the Elizabethan stays and the stays from the 1700’s are pretty much the same. I put my waist measurement as 2” smaller than I am, from 25” waist to 23” and used the pattern generator for the basics of my pattern and customized my pattern further by looking after this diagram that I found somewhere on the internet. The bone channels were derived from this picture to give a more “18th Century Look”. I also added straps, tabs around the bottom, and a rounded bustline to the generated pattern to make it more like the pic.

(if this is your photo and would not like me to use it, tell me, and I’ll get rid of it) 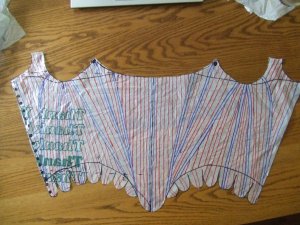 After cutting out my fabric I sewed the necessary channels for the bones (as indicated above). This didn’t take too long, as you’re sewing straight lines. But, the hard part came when the ties were ready to be put in… In order to guarantee that the cut cable ties won’t pierce through your corset while you’re wearing it, they need to be dulled after they’re cut. This is most easily accomplished by burning the ends. BUT this stinks something terrible, so by all means do it outside!
After I finished with that horrible ordeal, I inserted them where they are supposed to be.

So my stays were pretty much done by that point, only the bias tape, straps, and eyelets needed to be finished. I sewed the straps on by machine, but the rest I did by hand. It took a long time but I’m glad I did it.

I now have to repair one of the bones from the back of the stays b/c as you can see it popped out of place: 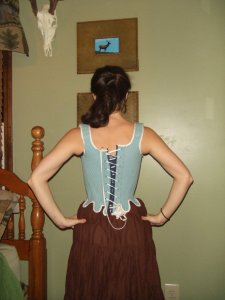 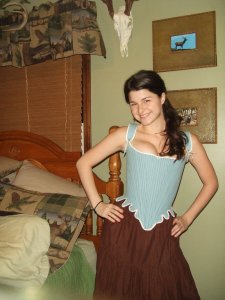 I’m very happy with how this turned out… and fortunate to have had these sites for help:
ElizabethanCostume.net
18th Century Stays
Mara Riley
La Mode Historique

If ya got any questions… just Holler!

I just wanted to get this out here for you all to see…..

If you like loose-leaf tea or need any tea supplies, this is the place to go. The owner is my aunt, who started her business not too long ago. She offers tons of organic teas and herbs, all of which she knows the health benefits that come with each tea. I’m very impressed with how wonderful the teas are…. My mom and I have been drinking loose leaf teas for as long as I can remember and in all of our years, we’ve not encountered such wonderful teas anywhere else!

My aunt was previously a nurse and decided she was going to start a tea business where she can help people with tea, rather than masking problems with prescription drugs. She’s extremely knowledgeable of what herbs and teas will do for certain problems and will do custom blends for anyone who needs it. I don’t want to sound like an add, but her stuff is exceptional. YOU SHOULD CHECK IT OUT! CLICK HERE