Unlike a lot of professional internet surfettes, I don’t have a tumblr or a twitter. I don’t do video posts/blogs. I don’t have a WordPress blog. BUT I do have a Pinterest, which can be quite bedazzling to behold.

I have to limit my time on the blasted thing, because I spend more time looking at pins to do than actually doing them. I’ve decided that I should try to do at least one pin a week.

Some background on this particular post… I’ve been dying to change up my hair lately. I’m growing it out, but it’s reached the dreaded “half point” where it’s not really long, not really medium length, and lacks any interest. There was a point where I was ready to chop it for a pixie cut and dye it Christina Hendricks Red, but then I remembered that I need to have it long and “natural” colored for Gettysburg.

I mulled on the ideas of cutting and dying for a week now and I’ve decided I won’t cut it until after Gettysburg, and red is really hard to make convincing. Sigh. Stuck with my hair as is.
I trimmed the dead ends, and then came across a pin regarding naturally darkening your hair with cocoa. O.O I think I can handle that!

This is the pin I ran across… it calls for regular cocoa, but of course, in my infinite wisdom (note: sarcasm) I changed it a little bit. I’d like to darken the ends of my hair or darken it all to a deeper shade. Soooo this was the recipe I ended up concocting:

Mix all the ingredients together and apply to wet hair. Secure hair in a bun, cover with plastic wrap or shower cap and let sit for 1-3 hours.
According to the original post/recipe, the yogurt is supposed to open up the hair so it can accept the darker color, and the vinegar acts as a mordant to lock the color in.

I kind of panicked after I mixed up the recipe. It’s SUPER dark and I was feeling kind of like Anne Shirley…. “He said it would turn my hair a beautiful raven black–he positively assured me that it would.”

*cue nervousness* So here’s my hair before I put on the stuff:

You can see it’s kinda blah as a cut, and I don’t want a blanket color for it, I’d just like to liven it up a bit and darken the ends.

Now, I didn’t realize this was going to be a paste when I started this project. I figured it would be more like a watery solution to comb through the hair, so I doubled the recipe as I always do (my hair is both thick and long-ish). In order to get this stuff to get to all of the hair, I had to wet my hair to begin with, then apply the paste. Make sure you’re naked and in the bathtub, with the shower curtain drawn…. the stuff gets EVERYWHERE.

I put my hair in a top-knot and covered it with plastic wrap. Make sure to keep a damp washrag with you to wipe off any that decides to run down your face or neck. I was sweating with the plastic wrap on my head, which led to some drizzles.

I left it on for 3 hours then washed my hair like normal. I had to scrub my shower after it was washed out, because it looks like I had massacred a chocolate bunny. Thankfully it didn’t stain my tub, which was my biggest concern. I blow dried my hair, then went to bed because it was late, but managed a picture the next morning.

So what did I think of this whole thing?
Well, my hair was REALLY shiny, which was nice. But it wasn’t as soft and had a tendency to tangle more than the oil, vinegar, and honey rinses I have done in the past.

Did it do what I wanted it to?
No. I was after this mask to darken my hair, and it did the opposite. The ends of my hair are now a little brighter and almost reddish in color. I can see it working great for someone who’s hair is real brown, but my hair is a brown black, so fading into a reddy-brown isn’t what I had in mind. The second picture above is closer to the color of the ends than the picture before it.

Would I do this again?
Nope. I wanted darker, and got lighter. I may go back to the coffee soaks I did in high school, they actually did darken my hair really well.

After being married and moving into a new place, we took in a lot of free stuff. Everyone seems to have stuff they don’t need in their home so many people gave us their old things to furnish our house with. This is great! Especially for an extremely frugal me, who hates to spend money on anything unless it’s a necessity…. well unless it’s fabric or yarn or antique.

One of these freebies was a couch. A very comfy couch. And I recovered it! Same comfort, Better style. For $100 I transformed my blah couch into a pseudo-antique looking one!

This particular couch came from my in-laws and happens to be one of Devin’s favorites. It’s seriously one of the most comfortable couches I’ve had the pleasure of sitting on. It was just so, well, ugly. I wanted to recover the couch but I do not have the money to put out for upholstery fabric because of course, I only want the most prettiest, expensive, light tone-on-tone upholstery fabrics that cost a gazillion dollars per yard. So I had conceded that I would have to put that idea out of my mind. But, having found a brand new addiction for Pinterest (if you would like to follow my boards, click the link!), I started seeing all these pictures of people using drop cloth as a sofa cover! What a wonderful idea! I thought, but I realized… making a slipcover is a LOT of work and I greatly dislike working with piping. Blech. Luckily though, another pinner had posted her own adventures in upholstering with a drop cloth and the results were great! I read her post, watched a couple of videos and decided to attempt it on my own.

With the help of my mom, we decided on what was gonna happen with the couch and we bought our supplies:

First, I washed the drop cloth 3 times and dried it with softener… it took FOREVER. But I’m glad I decided to soften it, because boy it was not comfy before. After that I analyzed my couch and figured out what I wanted to do with it. I wanted a “camel back” or “hump back” to my couch, so I used a lump of the polyester stuffing material and stapled it in place with some quilt batting. This part was interesting because we had to pack the stuffing so tightly. Also, finding the wood support beams took a little trial and error…. and frustration.

After the hump was made, we then stapled the upholstery foam to the back of the couch to smooth everything out and to make the back a little cushier. More quilt batting was added atop this and cut to size, then we laid the batting out to use as a pattern to cut the canvas (being extra sure to add lots of seam allowance to the sides) Then the batting was stapled into place. 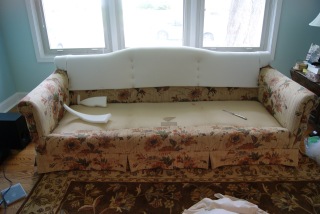 After the back had been padded with foam, we added the canvas, stretched, stapled and pleated to fit.

The front lip of the sofa proved to be far more challenging than I anticipated. All of the support beams were covered in springs and knots, leaving me completely helpless as to what to do next. I had figured I would just staple the fabric to the support beams and be done with that process, but ended up taking another route. I laid batting on the “decorative fabric” of the lip, so as to cover up the weird pattern, then laid a strip of the canvas atop; stapled and tacked the fabric to the bottom, then whip-stitched the canvas to the original upholstery. This took me 2 hours and my pointer finger is still somewhat numb after 2 weeks. 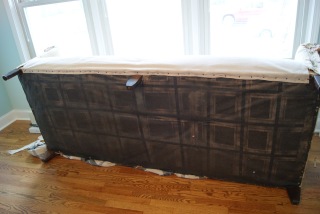 A similar process as the back was used for the arms of the sofa, apart from adding “stuffing” to the arms. Foam was added directly to the top of the arms and the process followed how we went about the back.

Next step I did the underside of the arms. Using batting for a pattern, then cutting the canvas. The hardest part of this was making sure the staples and cut tacks wouldn’t be seen. I stapled the fabric and batting, right side to couch, underneath the crest of the armrest then folded the piece down, to cover the staples and tacks. The fabric was then stretched and attached to the underside, back and front of the armrests.

The last, and hardest non-sewing part, was the final back piece. Like the under-sides for the armrest, the staples and tacks shouldn’t be seen, but one also wants the line to be completely straight. The only way to achieve this ( the sturdiest, longest lasting way) is to make a tack strip with finishing nails and a cheap piece of trim, nail it to the back of the couch, then fold the fabric and batting over the strip to conceal it. Tacking and Stapling is done to the bottom of the couch like normal.

Now…. THE hardest part was making the cushions. Ugh. I HATE making square cushions. So here’s a good tutorial for those of you who would like to know 🙂

I made two more cushions for the back, using the original cushions as patterns and the original zippers for thriftiness. All in all, I think it turned out well and is just as comfortable as before!

Last step before using is Scotch-Gard-ing, make sure all your windows are open and do as much as you can outside. Our house got fumey really quickly.

Since the couch is practically done that ends this post. But know, that because I like to make everything harder than it should be so of course I have decided I’m going to do another, unnecessary step… adding wood to look like it is, or kind of is, an antique. But that shall be a post for another day!